Florence Nightingale, Healing Touch and the Year of the Nurse 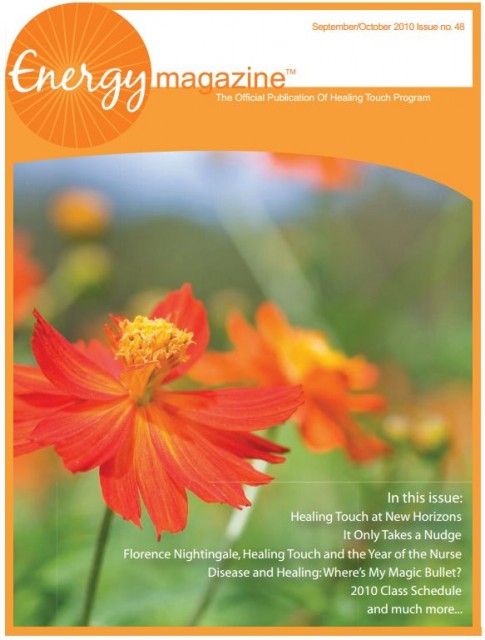 This is a story about nursing and about Healing Touch. Healing Touch is an energy therapy in which practitioners consciously use their hands in a heart-centered and intentional way to support and facilitate physical, emotional, mental and spiritual health. Janet Mentgen, RN, BSN formally created Healing Touch in 1989. The goal of Healing Touch is to restore balance 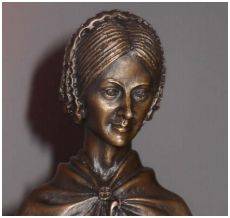 and harmony in the energy system placing the client in a position to self heal. Healing Touch emphasizes compassionate, heart-centered care in which the provider and client are equal partners in facilitating wholeness.

At the end of March 2010 I was notified that I had been selected by the University of Cincinnati College of Nursing Board of Advisors to receive one of six Florence Nightingale awards to be given at a banquet in April. Over 200 nurses were nominated for the award. The six of us each received a beautiful bronze bust of a young Florence Nightingale and a check for $1000. We were also invited to speak briefly at the dinner before 700 attendees. Nurses can be nominated by colleagues, patients and anyone in the community. I felt so privileged to be chosen for this award during the International Year of the Nurse and the occasion of the 100th anniversary of the death of Florence Nightingale.

The woman who introduced me that evening quoted from some of the nominating letters the committee had received. One letter told the story of Jim, a regular in the soup kitchen where I work as a parish nurse. Jim came up to me one morning and asked me to look at his head. He and I had met often as I moved through the table area offering people an angel card or word for the day but he was a man of few words.

He had never even asked me to take his blood pressure. For him to ask me to do something for him was a big deal. He removed his knit hat to reveal a large burn on his scalp. Some kids had thrown a firecracker into his hat causing a severe burn, which was now clearly infected.

Jim has no health insurance and refused to go to the Emergency Department. So I set about cleaning the wound and cutting away the matted hair in the wound. I shampooed his hair over the sink, did Healing Touch and dressed the wound.

This went on several times a week for several weeks. Eventually the wound completely healed. He now proudly shows people the scar. What is remarkable about this story is Jim. He is a changed man. He’s more sociable and out going. I believe that Healing Touch accelerated the healing process for this man. In addition, it gave me a way to engage with him and develop an ongoing relationship that has been a real gift. In my comments at the awards dinner I thanked many people but this is what I said to my Healing Touch friends who came to the dinner that night. “I’d like to particularly express my thanks and appreciation to my friends from the Healing Touch community.

To be honest, I wouldn’t be in nursing at this point in my life, if not for the practice of Healing Touch. Healing Touch was part of the holistic approach to nursing that invited me back to the bedside, where I reconnected with the reason I went into nursing some 37 years ago. That reason being – to make a difference in the lives of the people we are called to serve.

Healing Touch and Holistic Nursing were like coming home for me. Once again I became aware of the importance of simply being present to my patients no matter what task I might be engaged in.” I spoke that evening about Nightingale as a healer, a visionary and a woman of deep faith, and a mystic. I quoted Florence Nightingale in my comments and although this was written about nursing it is clearly echoed in what is taught in Healing Touch. Nightingale said “Nature alone cures” and the goal of care is “to put the person in the best condition for Nature to act on them.” So it is our job to do what we can and then get out of the way and let nature and the patient/client come to healing, whatever that means for each person and where they are in their life’s journey.

I closed my remarks that evening with this quote from Nightingale about the spirituality of work. She said, “Work your true work, and you will find God’s presence within you.” This quote is true of nursing and equally true of Healing Touch. I believe I have found my true work in nursing. Healing Touch invited me back to my true work  and for that I am so very grateful to Janet Mentgen and all those who continue to bring Healing Touch to the world.

Mary Duennes is a registered nurse with more than 37 years experience in a wide variety of clinical settings. She received her BS in Nursing from the College of Mount St. Joseph and a Masters in Labor and Employee Relations from the University of Cincinnati. She is a Healing Touch Certified Practitioner and Instructor and has taught Healing Touch and other advanced energetic healing techniques and holistic wellness practices in the United States, South Africa and Lesotho. Since July 2000, she has served as a Parish Nurse in an ur-ban area of Cincinnati. She served as the Program Director for Capacitar for Kids, a 3 year grant from Catholic Health Initiatives from 2003-2006. Capacitar for Kids teaches faculty, staff and students multicultural wellness practices to help them deal with stress, manage difficult emotions, and stay healthy. She co-authored Capacitar for Kids: A Multicultural Wellness Program for Children, Schools and Families – Teacher‘s Handbook, with Dr. Patricia Cane. In April 2010, Mary was named one of 6 recipients of the Florence Nightingale Award (photo above) given by the Board of Advisors of the University of Cincinnati College of Nursing. This article is also being featured on the 2010 International Year of the Nurse website www.2010iynurse.net under Nurse Tributes. The title of the story is Nursing and Healing Touch: My “True Work”