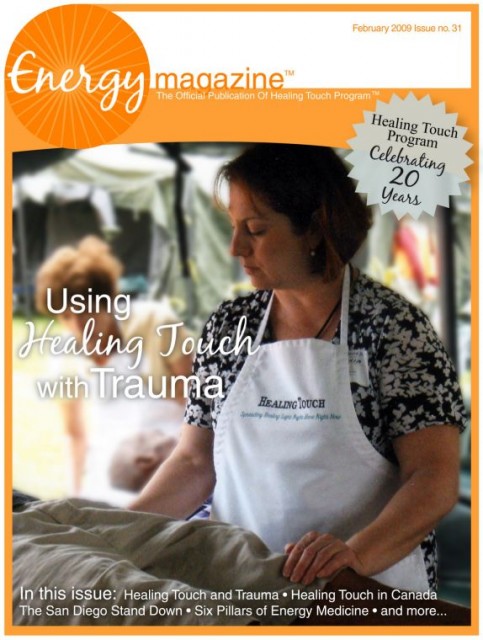 What brought you to Healing Touch? We listen to the stories at every workshop and marvel at the variety of paths that have led us to “the work.” When the workshops come to an end with Level 5 we “lose touch” with many of our classmates and the rest of their stories – and especially lose touch with what follows after certification. Certifi cation, of course, is only the beginning. Healing Touch changes our lives and together we are changing the world. This column will present profiles of these agents of change. KIA ABILAY, HTCP

ALOHA NEW YORK
How did a Hawaiian “hotel queen” find herself giving Healing Touch treatments while living in a tent for a year on the 200 acre Omega Institute of Holistic Studies in Rhinebeck, New York? Kia Abilay knows well how HT changes your life.

Employed in hotel management for 22 years, Kia took all her Healing Touch classes in Hawaii and was a volunteer at the Queen’s Medical Center in Honolulu. She is currently in private practice in Woodstock, NY with a returning and growing clientele at Omega. Because of the New York laws regarding touch, Omega asked her to change the name of her practice to Energy Rebalancing and Chakra Balancing. However, her bios and brochures state that she is a HTCP.

“I was grandfathered in since Healing Touch has been at Omega for many years due to the tenacity and dedication of Rita Kluny who introduced HT to Omega.” Because of urgent family demands, Rita had put out a call for someone to take her place at Omega and Kia answered the call. “Never in my life did I ever think about living in New York.”

“I share my learning of HT and energy work with my individual clients and refer clients to the HTP website to find HT practitioners in their home towns.” Sessions for workshop participant at Omega are done during the breaks and in the evening. “I do a max of six sessions a day. Between Omega and my own clients, I offer over 500 sessions from April to October.” Kia offers HT presentations to the staff at Omega, people on R & R, and has been invited on many occasions to teach at a Spiritual Living Group in Croton on the Hudson. In February 2008 she spoke to a group at the United Nations. “I give talks at a library series on Sunday nights.” Kia is currently enrolled in a two-year One Spirit Interfaith Seminary “to deepen my own faith and connection with the Divine.” She plans to bring Healing Touch into a hospital chaplaincy ministry.

As the founder of Kia Kreations, Kia created Chakra Bear, the first in a series called Ark of the Empowering Animals. “Tai Chi Tiger, the second in the series is having a slow start, cost-wise and time-wise.” She is hoping to have someone pick up production. Next in line will be Butterfly Touch — which Kia plans to dedicate to Janet Mentgen. “Other animals keep showing up – Massage Monkey, Meditation Owl, and Aroma Skunk,” among others. Visit http://www.kiakreations.com/History_of_ChBear.html. “Chakra Bear is a healing energy source, a positive learning toy and educational/teaching tool for healers and other practitioners. It is 100% cotton to maximize energy retention.” Chakra Bear has been used in classes for adults and children, at weddings, deaths, births. Some Healing Touch instructors have used them in their workshops. Kia finds inspiration for her animal line from the wild animals on the grounds of Omega. “A family of foxes was born under the wellness center.”

Kia’s Chakra Bear and coloring books have been used in Haiti for poor children through a NY ministry, in Unity schools, in Jamaica with disabled children not permitted to go to school, in a Romania orphanage, Healing Touch ministry work in Africa, in a children’s ICU unit in Santa Rosa, in homeless shelters in California, New York, and Hawaii, in a cancer ward for children in Westchester Country, NY, and at Queen’s Medical Center in Honolulu. They have occupied police cars and given to children who are victims of domestic violence and distributed in abuse centers for women and children in Maui. One woman in Syracuse, NY is sending bears to children in Iraq, and bears were sent to survivors of hurricane Katrina.

“I am presently teaching this amazing 11 year old Healing Touch and assisting him in developing his intuition.” Kia is still in touch with some of the children she taught in her early days at Omega. She feels particularly called to work with autistic children — communicating through Higher Sense Perception. Read Nina’s story on Kia’s website: www.rainbowheart.net/ newsletters.

Kia also relates her experience following 9/11. “People poured into Omega –those who were in or worked next to the Twin Towers — families who lost loved ones — families of firefighters. We set up prayer circles in the main field and offered counseling and energy sessions for people who didn’t know about their families. The energy in their bodies was like nothing I had ever felt before — fear and terror. For years I could feel that in the bodies of people from New York City.”

No longer in her tent home, Kia now commutes from her home and “cute office” in Woodstock. She is looking forward to the opening of the new Omega community in Costa Rica in either late 2009 or early 2010. www.almaverdecostarica.com. Contact Kia at kia@rainbowheart.net.

Who would you like to see acknowledged in the Practitioner Profile? We want to honor the vast and varied contributions of our Healing Touch Practitioners. It might be YOU! Please send your recommendations to Barb at barbdahl@aol.com.

About the author: Barb studied with Janet Mentgen in Denver in the 80’s and was in the fi rst group of Healing Touch Instructors. She has taught well-over 200 workshops in the USA, Canada, and The Netherlands. Barb is retired now from acute care nursing and lives in Seattle.

Florence Nightingale, Healing Touch and the Year of the Nurse

A Review of 'Awakening the Tiger Within' by Joy Heartsong