Teaching Others the Value of “The Power of Touch” 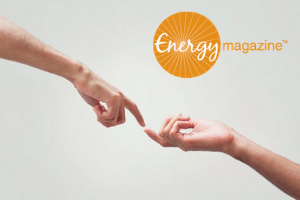 In July of 2010 one of our hospice volunteers registered to take our Healing Touch Level 1 class. He was the only man in a class with nine women that weekend. He made quite an impression - winning over the women with his warm smile, gentle voice, calm presence and loving spirit.

In January 2011 I received an email from him informing me that he had been diagnosed with esophageal cancer in December.  His cancer was so advanced that chemotherapy was begun immediately, leaving him very weak. He lost close to 50 lbs within a few short months and was spending most of his days confined to the couch. On good days he would email me with updates and finally he wrote that surgery was scheduled for June 6, 2011 .

In his last email he asked me if I could come to provide Healing Touch for him after his surgery.  Through emails with his wife, I was able to make arrangements to meet her the day after his surgery so she could be present for the care I had planned to provide.

The day arrived and I met his wife outside the doors of the Intensive Care Unit (ICU). We hugged first and then she informed me of his condition. She told me that his surgery was far more extensive then originally anticipated and that because of the intense pain he was having, the doctors chose to place him in a drug induced coma. She stated that I would probably not recognize him - and - she was correct.

As I entered the room, I could not believe what I was seeing. Upon observing him and the energy in the room, noting all the tubes coming from his body and listening to the sounds of the machines helping him stay alive, I knew it would be too invasive to do any hands-on techniques.

My energy assessment confirmed the intense pain he was having. I was shocked at the degree of heat I felt over his surgical incision. I began with Magnetic Passes Hands in Motion and Hands Still, followed by Pain Drain, and then Magnetic Clearing and a Chakra Spread - all without touching him.

His wife remained at his bedside while I worked. As I observed the expression on her face and how helpless she appeared, I decided the best thing I could do for him was to teach his wife what I was doing - precisely what he had learned in class.  Putting ego aside, I realized that his wife was the beautiful angel and healing presence that he needed in ICU - along with universal Divine Spirit and a little guidance from me. I made two visits that week, each time teaching her pain management techniques (Magnetic Passes Hands in Motion and Hands Still, Pain Drain and Magnetic Clearing) that she could do while she was with him.

His three week hospitalization, most of which was in ICU, was followed by a few weeks in rehab to build his strength and to be able to eat before being discharged to home.

It has been a year since his diagnosis. He told me during a recent telephone conversation that although he recently had surgery to remove scar tissue, he feels he is making progress. He also shared that his wife continues to do the Healing Touch techniques for him that I taught her - but she is eager to learn more. They have set a goal to attend my Level 1 class in October 2012 - together.

Sometimes when you least expect it, the universe provides the answers we seek through the experiences we share with others. It is rewarding to share my gifts and talents to help others open the door to the healing abilities they possess.