Cancer and Healing Touch - My Journey 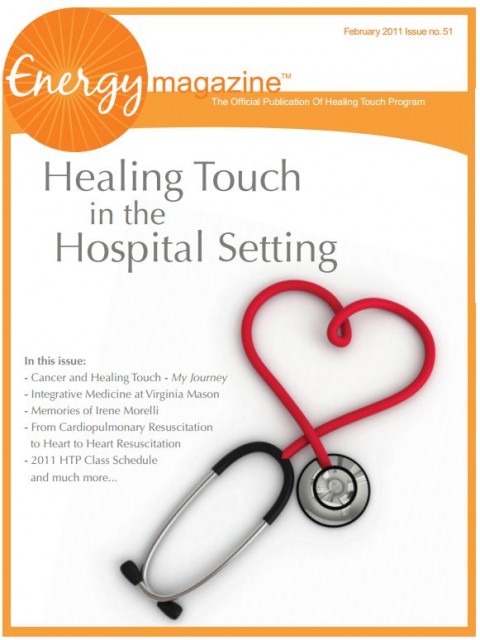 In November of 2004, during a routine physical, my doctor felt a mass in the lower right side of my abdomen. Further testing revealed the presence of stage 4 neuroendocrine carcinoid tumors that had originated in the small intestine and metastasized to my liver and peritoneum. This is a “rare cancer” they said, one of the “best” to have because it grows slowly. “This is cancer,” I said. “There is nothing good about it.” I was 51 years old. My world was rocked. 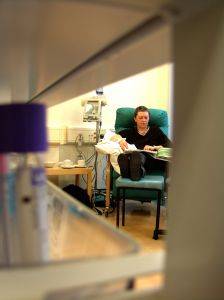 My grandfather was a chiropractor, one of the first in the area. As a child, I was adjusted regularly and raised without immunizations. Chiropractic became my primary medicine of choice. Natural healing principles became second nature to me as I studied herbalism, homeopathy, nutrition, and iridology. You get the idea.

I had cancer? The diagnosing gastroenterologist said I needed surgery. He called my home often asking if I had seen a surgeon. Those calls were never returned. He finally sent a certified letter with all the grim news.

During 2005, I traveled the country looking for the natural magic bullet. It took that long for me to realize that I was in profound denial and that the tumors were still growing. Did I intend to take any immediate steps to prolong my life? One night at the end of February, 2006, I found myself experiencing intense, excruciating pain. Weak and sweating, I assured my husband that it would pass. After several hours, it did, and I fell into an exhausted sleep. In hindsight, I came to understand that the pain was the result of an obstruction that eased when the intestine stretched around the tumor instead of rupturing. This was my first miracle and a huge wake-up call. Shortly after, major surgery was performed and I began the long and painful recovery that brought me to Healing Touch.

The cancer surgical floor was also the palliative care floor at this prominent teaching hospital. Down the hall, people were dying and cries of pain could be heard in the relative quiet of the night. I was petrified and the staff knew it, as I slept little. I laid in bed with my hands over my ears to block out the noise. No one even cared to offer a visit from the floor social worker or chaplain. This standard of care attended only to my physical body.

My surgeon went on vacation within hours of completing my surgery. He told me a woman doctor would cover for him in his absence. Would that be okay with me? It did not matter. After the surgery, I frequently demanded to go home and the resident even signed orders discharging me a day early. After rounds the morning I was to leave, the doctor in charge came back without the usual entourage and talked to me -- really talked to me! After saying that I did not look so good, she asked me what was going on. The tears started and I do not even recall much of what was said except that my gut hurt. She gave orders for regular pain medications even when I did not request them and it became clear that I was not leaving yet. God Bless her for her compassion! I made a heart connection and it was what was needed to kick my system into healing mode. I slept soundly all day, waking in the late afternoon -- actually feeling well! It was like the healing Spirit of that surgeon and lots of angels and light beings put me out and went to work! My sleep was so deep, the nurse refused to wake me when it came time for my pain medication.

The second miracle was that this hospitalization sensitized me at my core to the patient experience. It was one that I will never forget and created within me the same compassion that I had received. I carry it to this day. It also created in me an intense desire to get past the cancer experience and get on with my life. Knowing what I know now, I would have given anything to have received Healing Touch. It could have made a massive difference to me and my recovery.

Surgical de-bulking is the treatment of choice for this cancer. My healing process could not be aided by traditional chemo or radiation. It simply was not effective. There was only one drug that was used to ease symptoms and I found myself using a subcutaneous pump 24 hours a day with a drug cost exceeding $40,000 per month that was blessedly covered by medical insurance. Who knew how long that would last?

They say there is no cure for carcinoid cancer. Did I want to live what life was left with great fear, tied to a medical system that, at best, hoped to offer me what they considered to be a reasonable quality of life? Or did I want more? Indeed, I wanted more -- much, much more.

Cancer changes you. Life slows down. There is uncertainty. There are the medical treatments and seemingly endless tests. There is the pain. There are thoughts and changes in what you thought was important to what becomes truly meaningful. You try hard to maintain a semblance of normalcy while trading in the old rat race for a new one. There is fear and panic and anger and depression and the release at one time or another, of the entire range of destructive and unsettling emotions.

As a professional photographer, my camera became my therapy as I focused on nature and the laughter of children and the truth that I found in people’s eyes and faces. The camera does not lie. In fact, the sadness or fear captured in the eyes of others reflected my own sadness and fear. Their longing and desperation mirrored my own. However, I also saw hope and connection and determination, as well as, acceptance and peace. I stopped photographing weddings and events and all those posed, seemingly happy times and began to focus on chronicling the legacy of patients in active treatment and at end-of-life in hospice. It was an honor, always a sacred time, spent talking and waiting for the perfect, sensitive moment that opened a window to their souls.

Since I was raised within the holistic model of medicine, it had become ingrained in me that I was ultimately in charge of my health. The doctors could offer me the best their training and technology had to offer, but I was the one to make the decisions about what was best for me. I was taught that the healing of my mind, emotions and spirit could have a positive impact on my physical body. Four doctors were “fired” before I found one who would allow my perspective a grudging validity. It was enough. I had now set the stage to function within both paradigms and to begin healing those parts of me that drugs and surgery could not touch. While the doctors treated my “outer body”, I needed to journey within to the negative patterns and deepest aspects of my life that I had avoided confronting.

Gratefully, my inner core Self, my Spirit, was in charge now. I was guided to a number of holistic practitioners who supported, in their especially skilled ways, not only my physical body but vitally important to me, the uncovering of childhood trauma. Those memories had created deep and long-standing stresses that had slowly eroded my immune system and created the terrain that allowed cancer to grow. With incredible love and support, I found myself on a roller coaster of introspection, recognition, release and healing that continues to this day.

Two of these much-loved practitioners were Healing Touch Instructors and it did not take me long to yield to the pull of my own heart and begin training in January, 2009. Having embraced Janet Mentgen’s vision I am presently, a HT Practitioner Apprentice, preparing for Level 5.

It should come as no surprise that I work, almost exclusively, with cancer patients at a local resource center and in my practice. Gradually, I realized that there were important gifts that I discovered in myself through cancer. It is difficult to share that cancer could have been the best thing that ever happened in my life. Yet, it opened my heart to love and personal healing that prepared me to relate to and hold sacred space for others.

As you work with cancer patients in your own practices, understand the importance of eye contact and gentle touch. Honor the amazing journey that has led them to you. Recognize the truth that everything is in perfect order whether they heal, learn to livewith a chronic disease or pass on. The time spent with you in Healing Touch nourishes, strengthens and allows your client to step away from the hard realities of cancer and into the presence of love, where healing occurs. The techniques we are taught are so very important but as Janet wrote, it is the clarity of your intention and the openness of your heart that engages the client’s Spirit to heal. Remember your own need for selfcare. All of us have lessons to learn. What greater gift is there? In March of 2009, knowing that it was absolutely the right thing for me to do and never advocating this action for anyone else, I removed the chemo pump and stopped all cancer medication. At my next visit to the oncologist, with pristine test results in hand, I told him what I had done. He had little to say and agreed that my next check-up could be in a year. In cancer circles that is called a remission. For me, I have no intention of ever looking back.

Pat is a Healing Touch Practitioner Apprentice preparing for Level 5 training. She has become an active member of the volunteer wellness team at in and is in the process of creating her own practice. Pat is also a professional free lance photographer specializing in spontaneous, photojournalistic commissions. Her journey with cancer has given her the privilege of photographing others in their life-changing healing experiences, be that a path to remission or to hospice. “Both Healing Touch and photography have taken me to places of knowing that I can offer my gifts and make a difference in people’s lives. It has created a heart-centered awareness that is both sacred and nourishing.”For further information on her work, feel free to contact her at sister46@gmail.com.