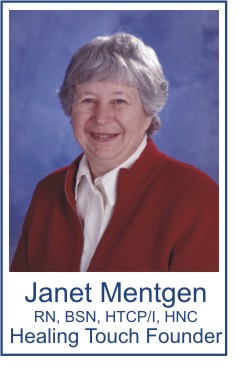 Janet Mentgen, RN, BSN was an energetically sensitive nurse. Her drive was to deepen and expand the connection between nurses and their patients. She saw the positive effect of touch while using various energy techniques and modalities. Janet began using her energy based healing skills in 1980.

Janet was a practicing nurse for 43 years. Her early work was with the U.S. Navy, then as emergency room nurse, and then home health care nurse. Her real love of patients and the nurse connection began emerging as she developed her "healing touch" methods. She shared her methods by teaching continuing education classes for nurses at Red Rocks Community College in Lakewood, Colorado. Her research, with the application within her private practice, and her teaching of energy medicine earned her the Holistic Nurse of the Year Award from the American Holistic Nurses Association in 1988.

Within these few short years, Janet Mentgen revolutionized the medical model to include a clinical approach to energy based therapy. Her legacy lives on through the Certified Instructors and Certified Practitioners and thousands of students who are bringing a holistic approach to healing. Healing Touch emphasizes compassionate, heart-centered care in which the provider and client are equal partners in facilitating wholeness. Healing Touch restores harmony, energy and balance within the human energy system and supports the self-healing process of becoming whole in body, mind, emotion and spirit. Healing Touch complements conventional health care and is used in collaboration with other approaches to health and healing.

Due to the extraordinary success of the program, the company began using its other legal name, Healing Touch Program™, in June of 2005. This change recognize the global expansion of Healing Touch in hospitals, communities, hospices, clinics, schools of nursing, and the long term care centers throughout North America, Central America, South America, Europe, Africa, Australia, Asia, and New Zealand.

To ensure the continued growth of the Healing Touch Program™, Janet transferred the ownership of the Healing Touch Program™ to her children; Bill, Lynn and Lisa in May of 2005. On September 10, at the 2005 the annual international Healing Touch Conference held in Breckenridge, Colorado, Janet announced her retirement and the transfer of leadership to her children in the midst of 600 conference attendees. In terms of clinical and professional direction, Janet mentored Cynthia Hutchison, RN, DNSc, HTCP/I as her chosen Program Director from 2003 through her death. She and passed on the directorship role to Cynthia in May of 2005 in sacred ceremony with HT instructors at Shadowcliff Retreat Center, the location where she birthed the idea of Healing Touch.